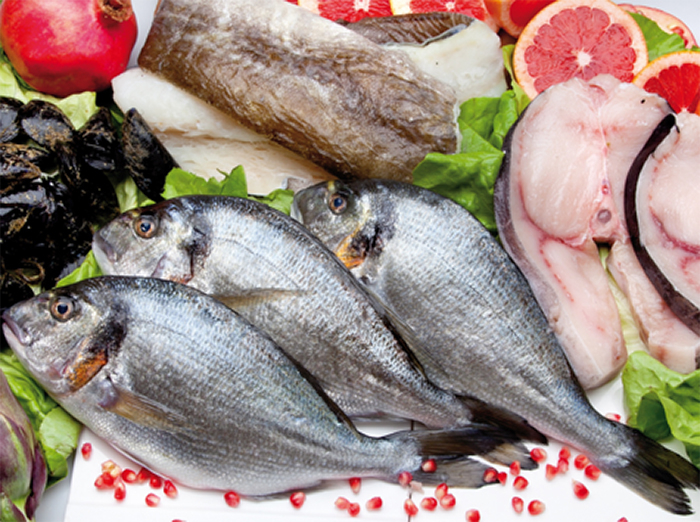 “Should I be eating fish?” “Do I have to eat fish?” “Why is going pescatarian the latest Hollywood craze?” Well I can’t speak for Hollywood – who knows why the good people of Hollywood do some of the things they do, but let’s walk through the pros and cons of fish and I will try to answer the first two questions.

There are 2 main groups of fish from a nutritional perspective; oily and white.

Let’s talk about white fish first. Cod, haddock, plaice, pollock, coley, dab, flounder, red mullet, gurnard and tilapia are all examples of white fish. These fish are a great source of protein which is important for building muscle and generally making and repairing cells. White fish are also low in fat, this is because they mainly lay fat down in the liver, which unless you take the oil as a supplement we don’t eat. This makes them great if you are trying to reduce your fat intake or lose weight.

Salmon, mackerel, sardines, pilchards, herring, anchovies, carp and whitebait are all examples of oily fish. Like white fish oily fish are also a great source of protein but because they lay fat down throughout their bodies they also provide fat. The fat they contain is a healthy type of fat called omega 3 and the fat carries important vitamins A and D. 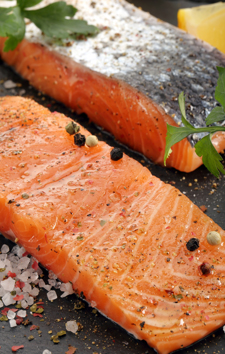 So why are these nutrients important? Let’s deal with the vitamins first. Vitamin A is important for helping us fight infections, supporting good vision in dim light and keeping the skin and the lining of parts of our body like the nose healthy. However take care if you have vitamin supplements as you should not have more than 1500 micrograms of vitamin A (often labelled as retinol equivalents) from diet and supplements combined. This is because over long periods these levels have been shown to increase the risk of bone fractures as we get older. If you are pregnant or planning a baby do not take any supplements containing vitamin A as we have good evidence that too much vitamin A damages the developing baby in the womb . You should also avoid supplements if you regularly eat liver more than once a week, as it is a super-rich source of vitamin A and you could exceed the 1500 microgram limit. We can also get vitamin A from cheese, eggs, some low fat spreads, milk and yogurt and we can make vitamin A from beta carotene found in yellow, red and green (leafy) vegetables, such as spinach, carrots, sweet potatoes and red peppers and yellow fruit such as mango, papaya and apricots. So if you are vegetarian or have a fish-phobic child (I know I do) there are plenty on non-fishy sources of vitamin A.

Vitamin D has been in the press a lot recently and a lot of scientific research effort has been going into understanding our requirements for vitamin D better. We can say for sure that in the UK we are struggling to get enough vitamin D in our diets and we now know that the amount of vitamin D produced by exposure to sunlight during the summer months is not sufficient to achieve adequate levels of vitamin D during winter. As a result 1 in 5 of us living in the UK have low levels of vitamin D in our blood, putting us at risk of bone-related problems. So as oily fish is a good source of vitamin D it helps make the case for including oily fish in the diet. We can also get vitamin D from eggs, fat spreads and breakfast cereal that have had it added and some powdered (but in the UK not fresh) milk. In all honesty even people who eat all these things struggle to get enough vitamin D so there is a growing swell of opinion saying that we should fortify something we all eat a lot of or recommend vitamin D supplements more widely. So this is one of those rare occasions where I say that you might want to consider taking a supplement. At the moment the UK Department of Health only recommends supplements of vitamin D for:

So finally what about those omega 3 fats. Well we know that people from countries where their diet is rich in omega 3 fats have a lower risk of heart disease than we do in the UK and that omega 3 fats help reduce inflammation in the body. There is also some evidence, albeit weaker, that omega 3 may help with memory and the prevention and treatment of depression. But do we have to get our omega 3 from fish? Well ALA or (alpha-linolenic acid) is a type of omega 3 fat found in vegetable oils, seeds such as chia seeds and linseed (flaxseed), nuts such as walnuts, pecans and hazelnuts and green leafy vegetables. It cannot be made in the body and must be obtained from the diet. However there is less evidence that ALA is protective in relation to heart disease than there is for the omega 3 fats found in oily fish. These “fishy” omega 3’s are called EPA (eicosapentanoic acid ) and DHA (docosahexanoic acid.) Although our bodies can make EPA and DHA from ALA, the conversion rate is slow and only small amounts of EPA and DHA are made and so it is recommended that we include sources of EPA and DHA in other words oily fish, in the diet. So this makes a strong case for including oily fish alongside white fish in the diet.

However there are some “cons.” You may have heard that fish can contain dangerous chemicals such as mercury and pollutants – don’t let this put you off as it’s only some fish and it’s easy to keep your exposure down to perfectly safe levels. On the white fish side shark, swordfish and marlin may contain concentrated sources of mercury that could be harmful to the nervous system particularly as it is developing. For this reason these fish should be avoided by women who are pregnant or planning a baby, and by all children under 16 years. All other adults, including breastfeeding women, should eat no more than one portion of these fish a week. Pregnant women should also have no more than 2 portions a week of dogfish (rock salmon), sea bass, sea bream, turbot, halibut or crab in order to minimise exposure to pollutants that have been shown to accumulate in these fish.

For me the pollutant issue is not really a big worry as it’s easy to keep our exposure to risk down below acceptable levels whilst still getting the nutritional benefits of fish.

So the main reason to eat white fish is that it’s a great source of protein that is also low in fat. The main reason to eat oily fish is that it’s the best way to get the omega 3 fatty acids EPA and DHA and these are the ones where there is most evidence of health benefit. Obviously if you are vegetarian or if you can’t eat oily fish for other reasons the best advice is to eat more ALA rich foods. To keep it simple if we all have 1 portion of oily fish and 1 portion of white fish weekly, avoiding the ones containing mercury or pollutants then we can enjoy the benefits without the risks. Check out the recipes for some “fishy” treats.